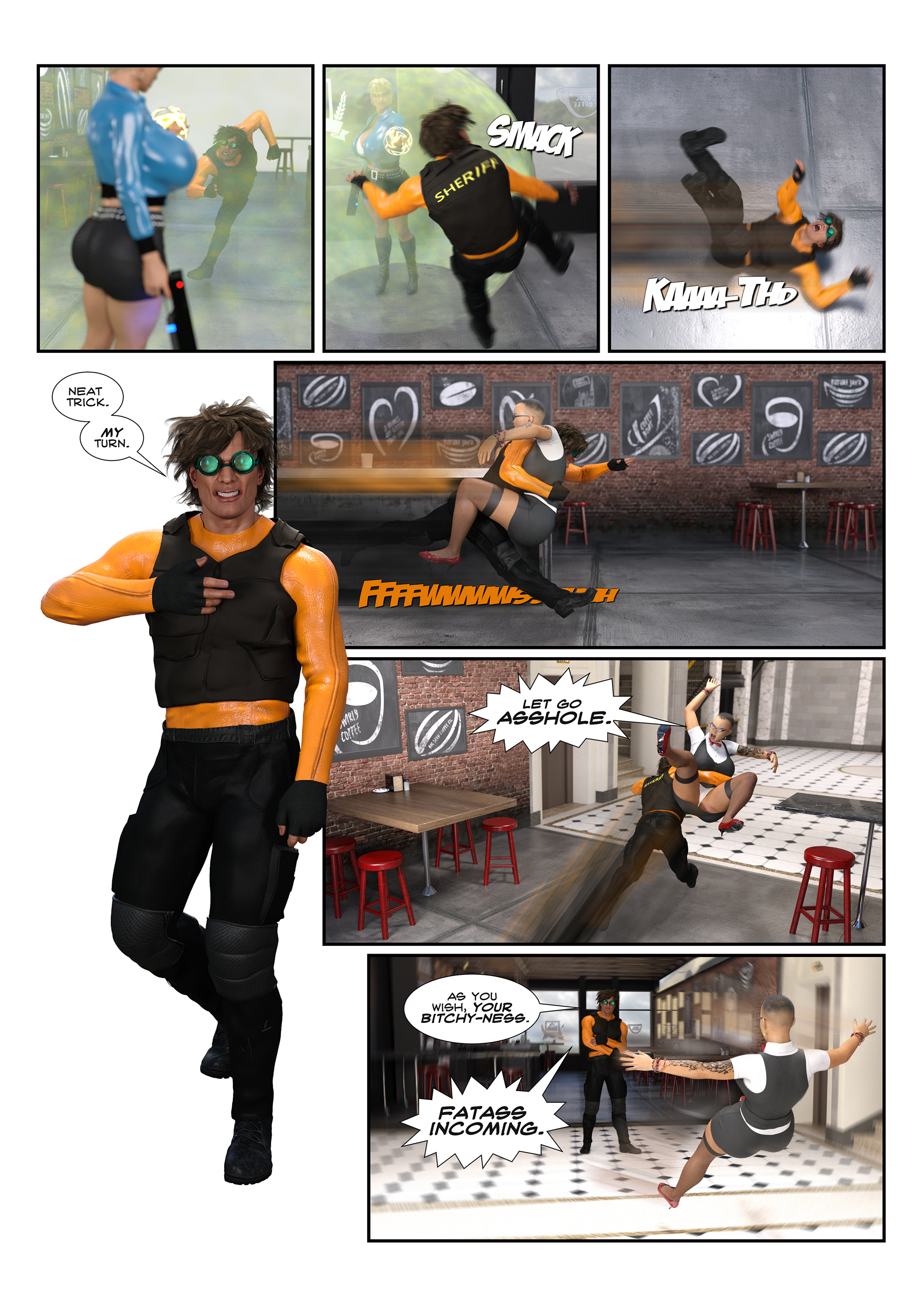 Page 12 executes the left-to-right-line-of-action concept much better than page 11, but it’s not without its problems.

To start, in Panel 1, I just plain forgot to insert the FM Department background. As mentioned previously, I added the background after the fact in a lot of the coffee shop renders, but in this one, it seems it slipped my mind.

It’s not earth-shattering, but still a pretty big mistake.

In Panel 4, Vamos is supposed to be dusting himself off after crashing into Shield’s force field and falling on the floor. Instead, it looks like he’s tapping his chest or something. It doesn’t look bad, it’s just now, looking back, I really didn’t accomplish what I set out to do.

The line-of-action is the final three panels proceeds nicely from left to right, as the barista is picked up by Vamos at super speed and then let go. This is a much better execution of action than on page 11.

It took a long time to get these panels right. Positioning Vamos’s arm so that it looked like he’s carrying the barista without clipping through her waist or chest was very very tricky.

I don’t recall exactly, but I’m certain I’m cheating here, and if you were to look at these scenes from a different angle, half of the barista’s body would be poking through Vamos’s.

I also had to re-render these scenes a bunch of times to get the barista’s placement within the frame correct (moving from left to right at equal intervals).

There’s a bit of a disconnect between Panel 5 and 6, but it’s not terrible.

This was also the first time I started using the FM Department atrium set, and boy was it ever a mistake.

I’m going to save most of the discussion of this set and its many many problems for a future commentary, but I wanted to briefly comment on merging it with the coffee shop set.

The coffee shop set was easy, as all of the walls and other components of the set could be easily hidden or removed. The FM Department atrium set (actually a repurposed city hall set) was far more limited and difficult to modify.

That I managed to mash them together at all and it doesn’t look like complete garbage is a minor miracle.

This is my favorite page so far, despite the change between panel 5 and 6 creating a little disturbance.

What 'change'? You mean the camera angle going from beside to behind? o_O

I think he's referring to my comment that there's a disconnect between panels 5 and 6.

The barista should be positioned in panel 6 halfway between where she is in panels 5 and 7.

The idea being to show a consistent left-to-right line of action between these three panels and your eyes move down the page.

She's too far to the right in panel 6.

From my perspective, there is no such thing as "cheating" when it comes to positioning items. If the geometry goes though another object it really doesn't matter, as long as we don't see it from our viewpoint. All that matters is what's in the camera/on the page at the moment we see it.

Yeah, most of the time it’s fine.

You have to be careful though, as sometimes clipping issues have other unforeseen consequences that only show up when you actually render.

As such, I usually play it safe and try to keep my setups as clean and clipping-free as possible.