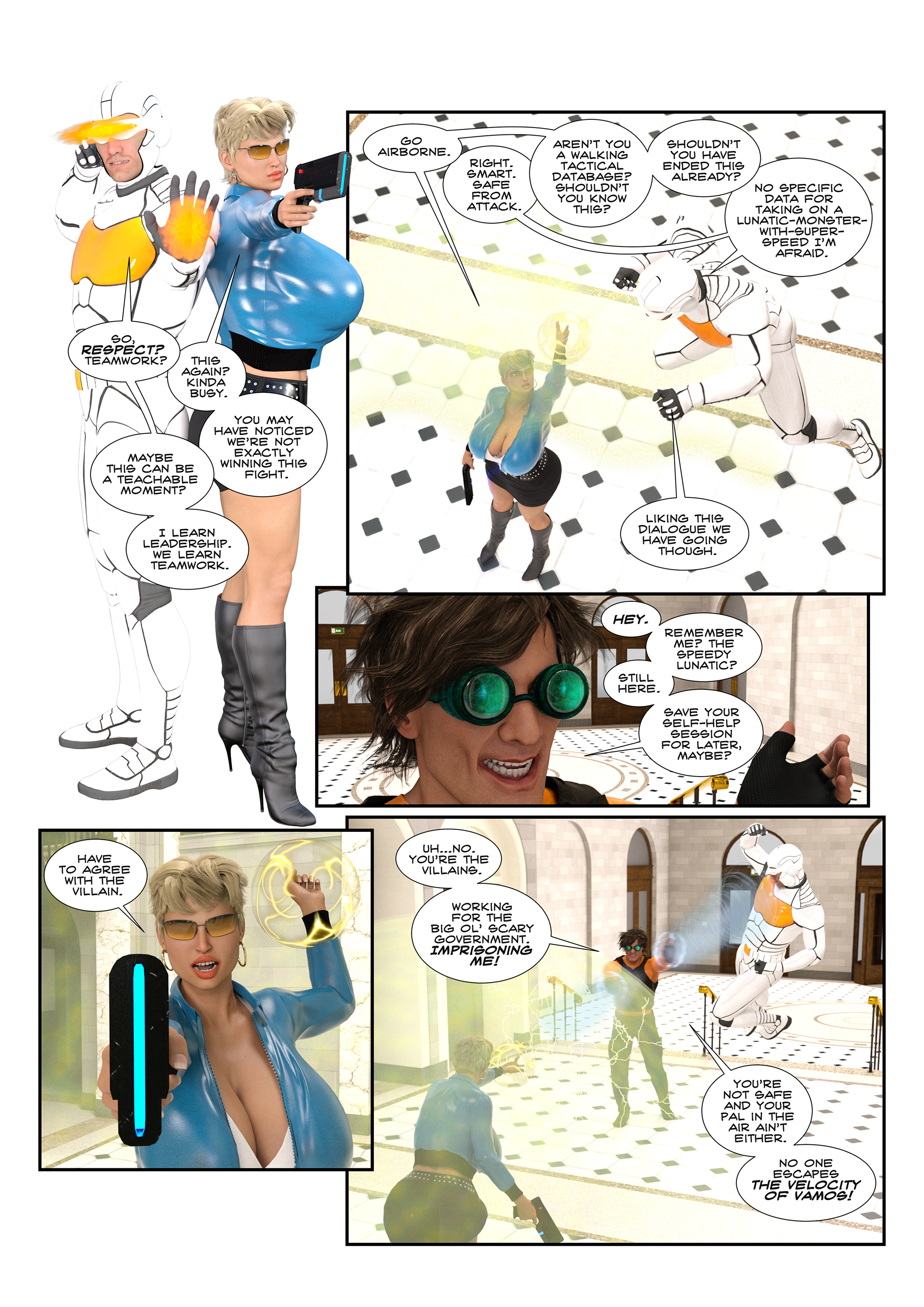 This page is impossible.

The area behind Vamos, with the small set of stairs followed by the wooden doors, shouldn’t be there. The coffee shop should be behind him.

So, what’s going on?

This bit of cheating actually starts on page 14, but it felt more appropriate to address in this commentary.

The building set and the coffee shop are two completely different environments (not surprising). When they appear in the same panel, I’m basically just mashing the two sets together and deleting a few walls.

Typically, the more stuff you have in your workspace, the slower DAZ3D gets, and mixing these two sets slowed my computer to a crawl.

The easiest solution was just to ignore the actual, in-comic layout and avoid using both sets at the same time as much as possible.

So, on this page (and in the previous page), I left the building environment completely intact, and what should be the coffee shop behind Vamos is just of that building set I had previously removed.

So, does this work? I think so. The layout of the building set is confusing enough that it’s hard to map out exactly where the characters are fighting.

This panel is probably one of the best renders in this issue.

I later re-rendered just Meteor and used the image for his bio and a bunch of ads.

I’m disappointed with how these turned out.

There needs to be a lot more distortion to convey their force. It just looks he’s hitting them with a light breeze.

In Panel 2, I’m attempting to show Shield’s force field as she’s deploying it. It doesn’t work. Especially not against the white background. Too hard to see.

Also, I really hate the 3D effect I used on her hands when she activates her force field in this issue. Starting with Issue 0.2, I’ve switched to a different effect which is much better.

Edit, more than half a day later (continued from the previous page for not spoilering) ... to crash into Meteor, or the wall behind Meteor, but now it seems like the two in panel 1 have time for a little chat.

The intent was to just to differentiate this dodge from his earlier dodges, while mirroring the point-of-view of Panel 5.

I don’t think he’d be follow through and actually hit Meteor. At a distance he might be able to dodge those beams. Up close that space is going to narrow.

That said, I probably should have showed him dodging the beams in a different fashion. One that was both visually distinct and didn’t imply that he’s racing towards Meteor.

Vamos is just "all eyes on me."

He likes the attention me thinks.