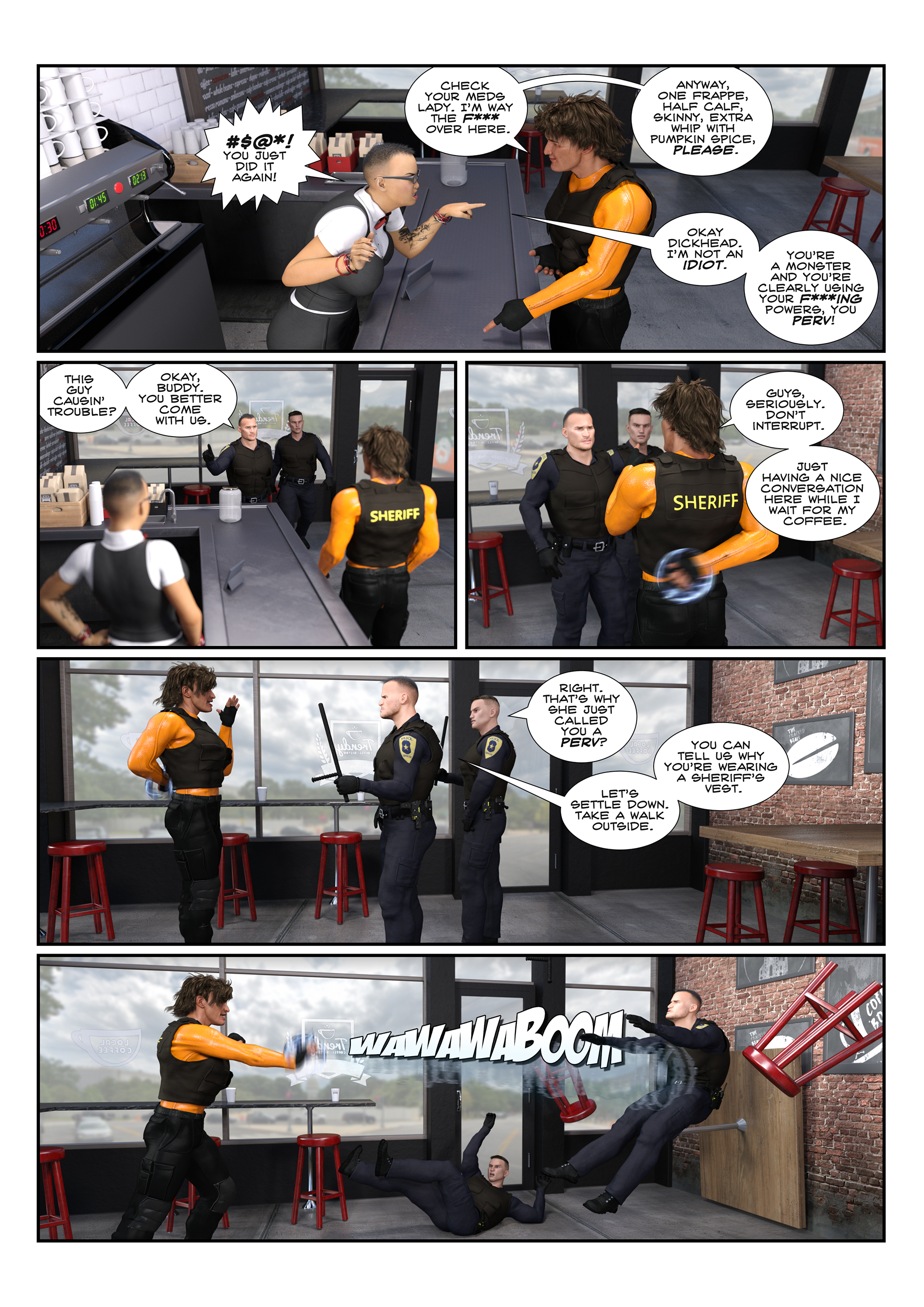 I’m mostly happy with Vamos’s design. The orange jumpsuit was a good choice, as the bright colour pops and nicely contrasts with the different environments. It also ensures that his actions are easy to decipher, even when he’s not in the forefront.

Working in DAZ, one of things I’ve learned is the importance of giving each character a bright defining colour (or two).

The default lighting in DAZ is dark and muted, and as much as I try to escape it, that awful lighting preset has a way of working its way back.

So, what’s the best way to make a character standout? Bright colours.

I notice that a lot of DAZ artists and comic creators, even those far more talented than I, struggle with this aspect of character creation.

So many DAZ created comics feature an interchangeable cast of characters in dark outfits hanging out in pitch black or shadowy environments, leaving the reader struggling to figure out what’s going on.

Dark character designs can work, but they’re hard to pull off in DAZ, especially if you don’t have time to put in hours lighting every scene.

But I digress. Back to Vamos.

When I created this script I deliberately structured it with a bunch of instances where I could practice the old “show, don’t tell” mantra.

For Vamos, I’m fairly certain it translates that he’s cobbled together an outfit after escaping from some holding cell in Federal Monster Department complex. This explains why he’s wearing an the orange prison jumpsuit and the Sheriff’s vest.

Or maybe it doesn’t translate. At least that was the intent.

Now, what I’m less happy with: Vamos’s vibration attack. The charging effect to show that he’s vibrating his hand at super speed just doesn’t work at all. Nor does the attack itself, which looks underwhelming and doesn’t really standout from the background.

Next time I’m contemplating such an effect I think I’ll try ripple distortions, or something that actually warps the image in concentric circles.

I agree with the choice of colors and your reasoning - thank you for considering this! (On top of that, I can imagine that Vamos would choose these colors on his own behalf, they seem to fit the personality he has shown so far.)

I also like the vibration effect but I find it a pity that the upper half of it is covered by the sound-word.

I recall spending a considerable amount of time on where to place the sound-word. I don’t remember exactly, but I think this placement was the least obtrusive.

It’s been months since I composed this scene, but if I had to guess, I’d say that I moved the camera to generate more floor space so I could show the one cop hitting the floor.

As for the table, yeah, that doesn’t make any sense. I likely nudged it over to make what happens with the table on the next page work. I can’t remember why I was so married to it flipping over, as it’s not really critical for anything.