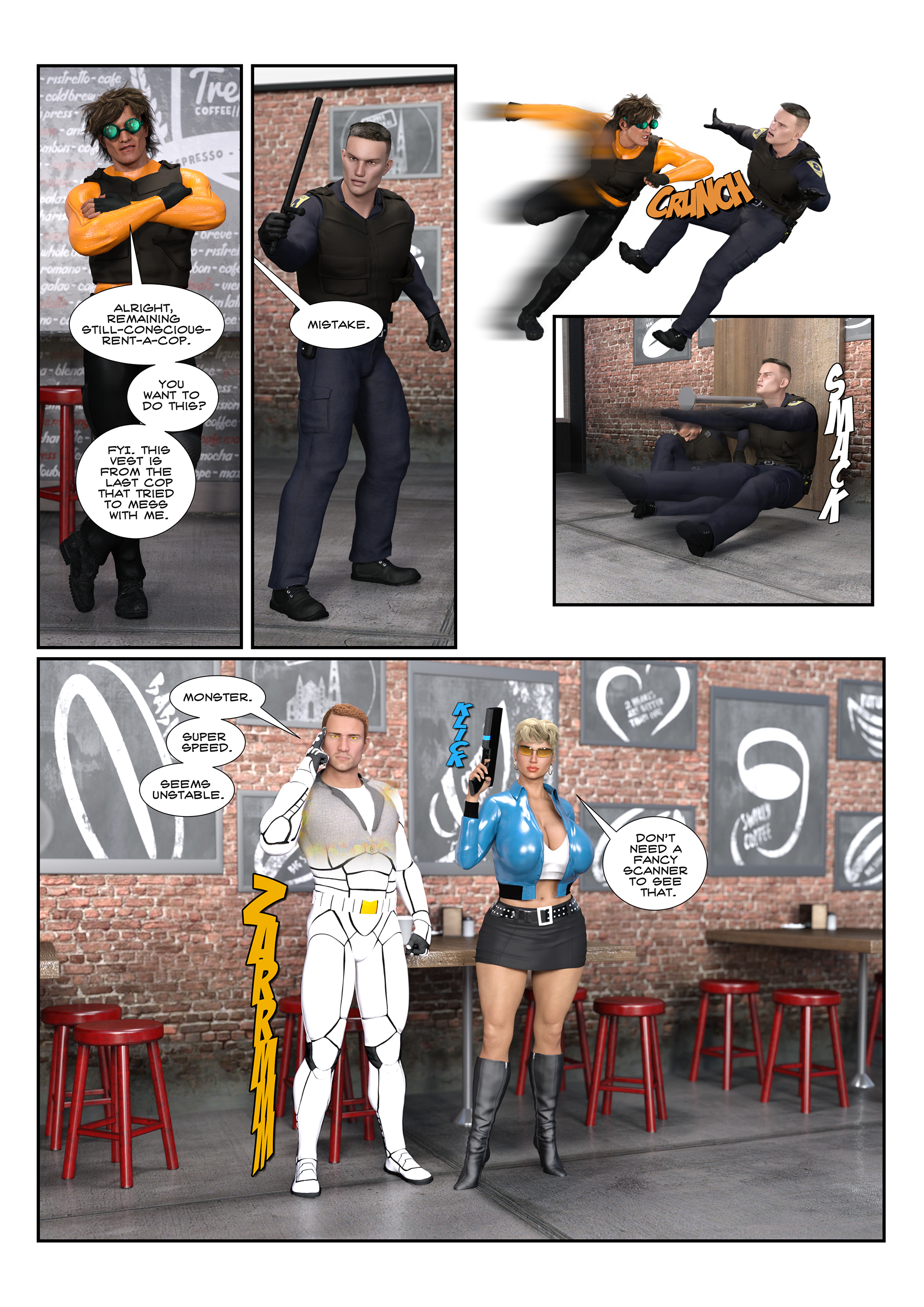 Remarkably, the script for this issue mostly stayed unchanged during production.

I re-jigged some of the panel layouts that didn’t work, and added and subtracted images, but text mostly remained the same.

One of additions I made is on this page, and I kinda regret it now.

Originally, in the first panel, Vamos didn’t comment on where he got the Sheriff’s vest. While I was finalizing this page, I decided to add the “FYI” line about how he “got it” from a cop he took out.

I wanted to make it explicit that he had already had a run-in with the law, possibly during his escape, and that his outfit was cobbled together.

While I still agree with the purpose behind the “FYI” line, I don’t think the actual text here works. It’s too on the nose. Too clumsy.

There’s something off about the action panels, but I can’t quite put my finger on it. Too much white space perhaps? Or maybe the panel where Vamos checks the cop needs to be bigger?

I really like Meteor’s transformation, which is a shame, because I’m not sure exactly what I did. I tried to replicate it recently, but I couldn’t get the effect to look the same.

Hmm. I like Panel 1 very much (the only little issue would be that the speech takes time, but, well, next we see the remaining-still-conscious-rent-a-cop already standing in a defense posture so the time was not wasted). Vamos strikes me as someone who would boast like that - casually but on the nose. (Apparently that's not your idea of his personality.)

The motion blur in panel 3 doesn't work well for me. Mostly because it's only behind Vamos, his left arm looks like it is not in motion, but is it should be.

And now we see in panel 4 that the table is where I expected it to end up the page before - but how come that cop #2's line of flight crosses cop #1's?

I think he would boast about it, but he wouldn’t say it quite like that. It reads too much like an exposition dump to me.

Yeah, the magical table has moved yet again.

The first cop is unconscious on the other side of the table, so as not to obstruct the motion of the second cop.

If hadn’t bothered with the magic table, none of this placement would have been a problem. I don’t remember why I was so fixated on including it.

(OMG... :-( Sorry, I corrected the typo and inserted the missing word. The spelling checker doesn't protect me from errors like these.)

"Don't need a fancy scanner to see that."