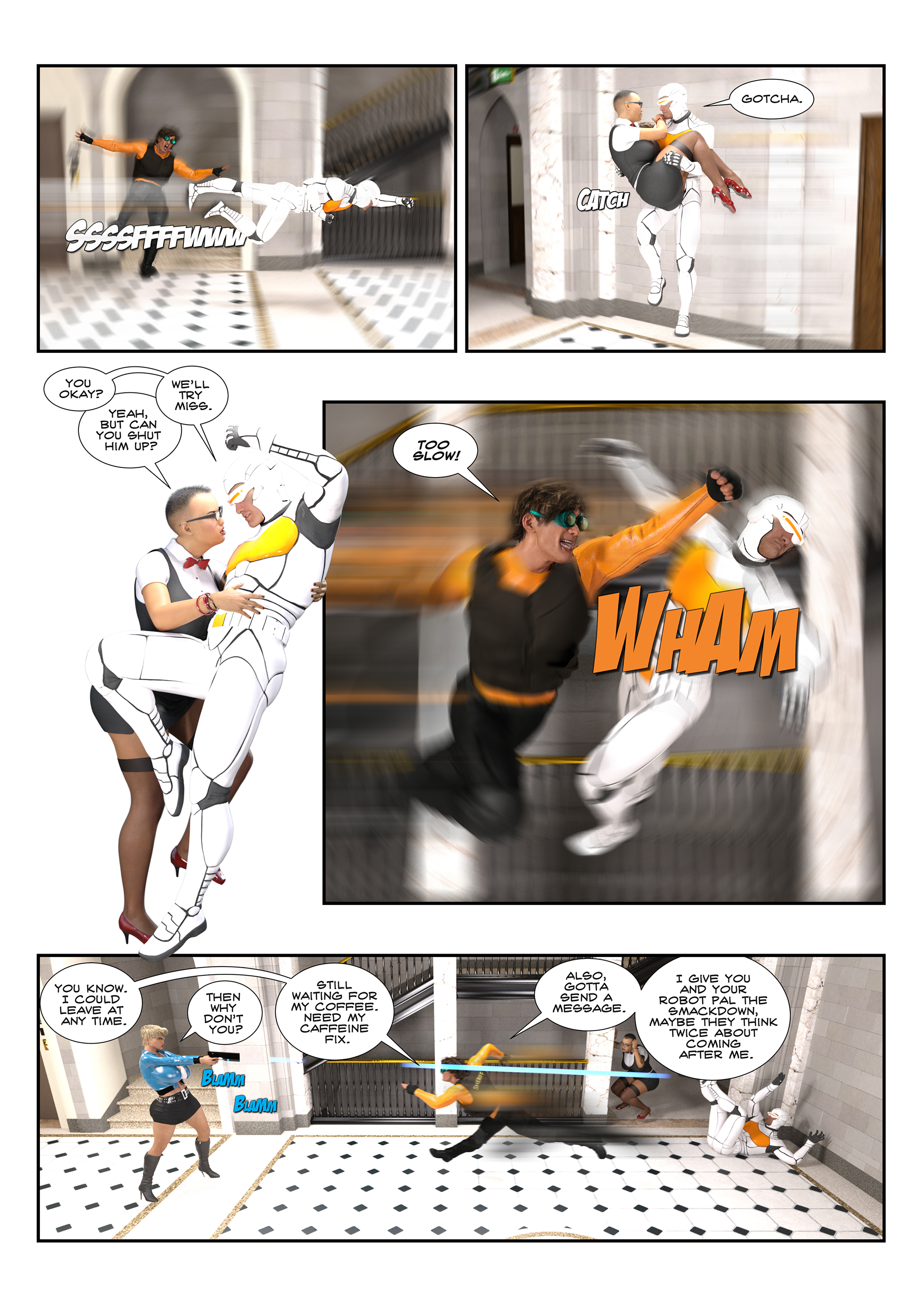 The set I used for the atrium of the FM Department is called City Hall. It’s actually a large complex with multiple levels and offices (it even has a press briefing room).

For the purposes of this comic we don’t really move outside the atrium (but trust me when I say there’s a lot more going on with this set.)

So, why is this a problem? Usually, in DAZ3D, the better sets let you hide/remove individual parts of the set (things like doors, ceilings, wall, etc.). Being able to remove these items makes lighting and positioning the camera easier, as you can just remove anything that gets in the way.

Done well, a good DAZ3D set is like having all of the pieces of a movie set, and being able to select or remove certain pieces (or entire structures) with a click of a mouse.

The City Hall set in question only lets you hide/remove a limited number of things.

For comparison, let’s revisit the coffee shop set from the previous panels. With that set you can remove/hide just about everything, which makes lighting and camera setup a breeze.

Now, working with a restrictive set means everything takes a damn lot longer. Lights have to be constantly readjusted to make sure they’re not hidden behind some wall or piece of geometry and the choice of camera position is severely restricted.

Even just maneuvering around in-program in such a closed space is a pain, as the viewport (what you see in the preview) is constantly being obstructed.

I’m never going to use this set again. If we ever return to this part of the FM Department I’m going to have to find someway in-story to remodel it.

Another problem with this set is the colour. There’s too much white, which, unfortunately, in DAZ3D gives everything a washed out look.

It also doesn’t help that Meteor is almost entirely white, so half the panels are white against white. Whoops.

The complexity of the set also led to longer render times and reduced image quality.

I don’t want to get into a full discussion of how lighting works in DAZ3D (mostly because I don’t fully understand it and will probably get some important technical details wrong), but, basically, lighting is the key to everything.

Back to the atrium. As mentioned, this set is huge, with tons of walls, levels, pillars, staircases, etc. All this geometry (which can’t be removed) means there are more surfaces for light to bounce off of, which means there is a lot more for the computer to calculate.

Even though some of these renders look terrible, on my ancient computer they were taking upwards of eight hours each.

So, in conclusion, all of the pages where I used this set took longer to render and looked significantly worse.

Like I said above. I’m never using this set again.

This panel is okay. The quality of the render isn’t great (lots of graininess). I’m compensating by hiding it with the radial blur, so it doesn’t look completely terrible.

I’m still figuring out how to properly use comic word sounds, and my choice here doesn’t really convey speed very well. “Ssssfffwww” sounds more like air coming out of a tire.

I do like the radial blur here. Not only is it hiding the crumminess of the tense, but it does a good job of conveying that Meteor, while not moving a Vamos-level speeds, can still fly fast enough that you feel the wake.

Wrong line-of-action again here. This panel should be flipped, with Meteor catching the barista from left, so it’s congruent with action from theprevious panel.

Not sure how I feel about the “catch” word sound. I think it helps sell the action here, but it also seems kind of clumsy.

Mostly happy with this panel. Though the lighting is too bright. Compared to the other panels, Meteor’s chest plate is a very different shade of orange here.

This was another super grainy render that I’m hiding with motion and radial blur effects.

I like the blur effects here. I like the “WHAM” word sound (one of the better word sounds in this comic). And I like Vamos’s expression.

Meteor’s expression isn’t pained enough. He should be gritting his teeth. He just looks bored.

I remember this render taking 12 hours, which is a really damn long time for a panel this size. And even after 12 hours it’s still super grainy.

This is the worst panel on this page.

The word balloons are all cramped up at the top, and, in some instances I had to cut them off to get them to fit. Even worse, the final panels are covering up parts of Meteor and the Barista (a big no-no).

I suspect, after length of time it took to render the previous panel, I was frustrated and quickly just pushed this one out without properly testing whether or not all of the text was going to fit.

I managed in the end, but boy is it ever messy.

Now this is my favorite page so far :)

A bit too much speech within the few seconds of this taking place but I get that Vamos wants everybody informed, somehow.

You can use the geometry editor to create new material zones and set opacity to 0 to hide things (don't know whether the light will still try to bounce of invisible geometry).

Probably more useful for general kitsbashing than manipulating this particular set, though.

Yes, I eventually learned this technique a little bit later (after I was done with this comic).

It was helpful for lighting for sure.

That is not how it works, Vamos.

He’s not exactly the brightest bulb. ;)

Meteor needs more of a blur effect, because he looks a little Static. The blur effects in the fourth panel works, but you should have had Vamos's lead leg pulled in the last panel instead of stretched out because he looks like the World's Fastest Power Walker or some weird Scissor Leg Man!

Yeah, Vamos's legs look super weird in the last panel now that you mention it, like he's got Gumby legs or something.

Again, this panel was not well planned or executed.