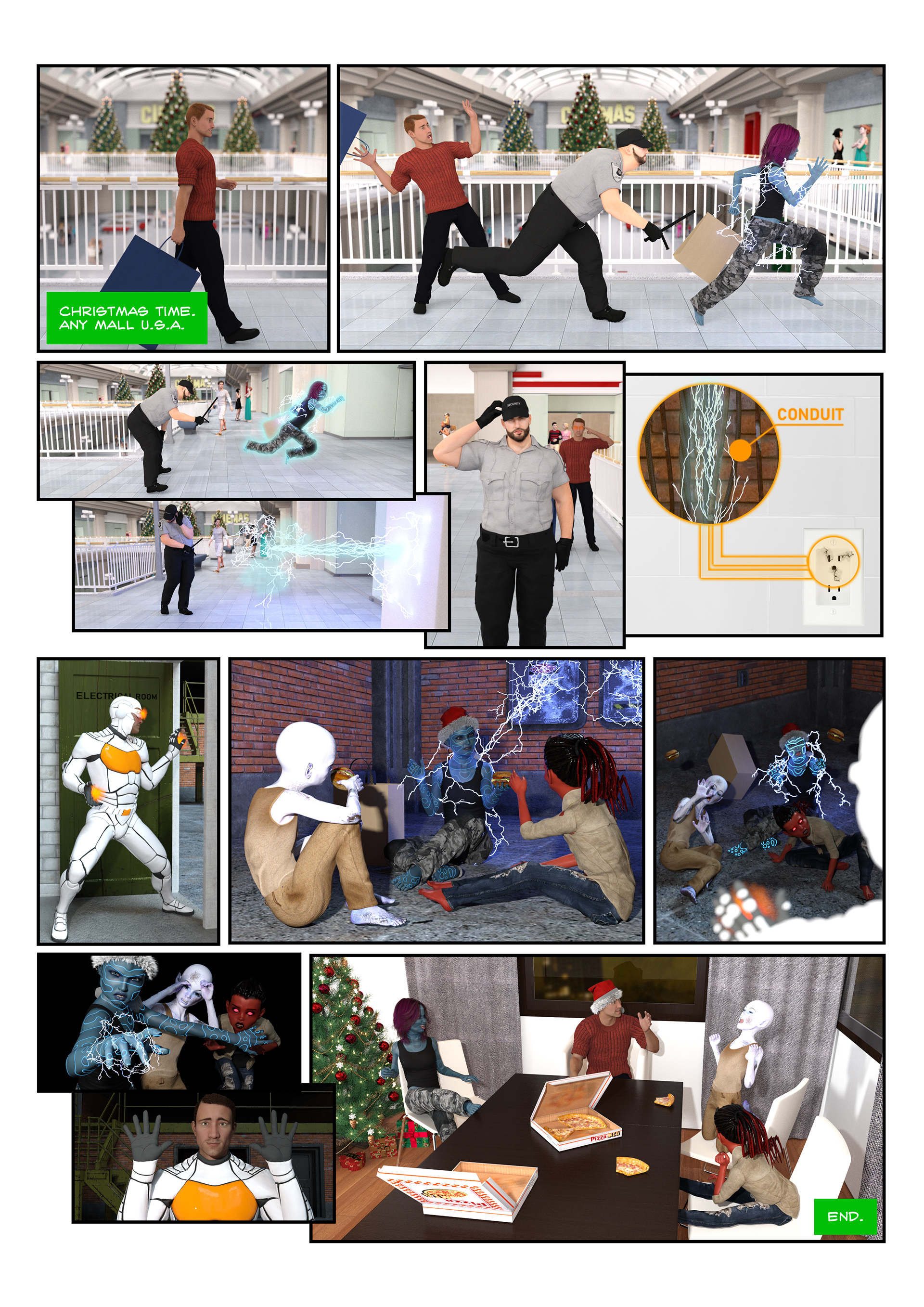 The idea behind this issue was to produce a one-page, speechless holiday-themed comic and release it just in time for Christmas.

Here’s where this failed:

- I started working on this only a day or two before Christmas, way too late to ever meet the self-imposed deadline (something I should have known with an issue already under my belt).

- Racing to meet a deadline meant skimping on render quality, which is obvious in the graininess of several of the renders. It also meant pressing forward despite wildly inconsistent lighting results.

- Creating a one-page, wordless comic with a coherent and interesting story is hard. This is something you attempt after you have 10 issues under your belt, not one test issue. The idea here is novel and think the story could work if I had had more experience.

The first half of this issue is much better than the latter. Conflict is clear. Powers are clear.

That said, there are still problems.

To start, the render quality is terrible. Everything is grainy and poorly lit.

Not sure what I was thinking with Meteor’s glowing orange eyes. Clearly, I just used the paintbrush in Photoshop, and it really shows.

I don’t quite remember what I was thinking here, but if I had to guess it’s probably because of how far he is away. In Issue 0.1, there’s a panel where I color his irises orange, and that looked pretty decent. I probably tried that here and the orange didn’t show due to how far back he is in the panel. Hence the overdoing it with the orange paintbrush job.

Lighting choice and setup is super important. Make a mistake and the same lighting setup will produce wildly different outcomes from different angles.

Case in point. It may not seem like it, but I’m actually using the same HDRI lighting environment for each panel in the lower half of the page (minus the last panel at the dinner table).

I’m not entirely certain what I did wrong here (as I don’t remember), but clearly, in my haste, I didn’t properly replicate the lighting from panel to panel, despite using the same HDRI.

For example, electric girl actually has the exact same glowing effect applied to her skin on panels 9 and 10. Unfortunately, because the lighting is off, it’s producing two wildly different effects.

Now it made me think: What would happen to "Monster-kids" like these if it wasn't Christmas time...? Different comics, different answers to the question... for some other comics I'd have an idea but here I can't tell yet.