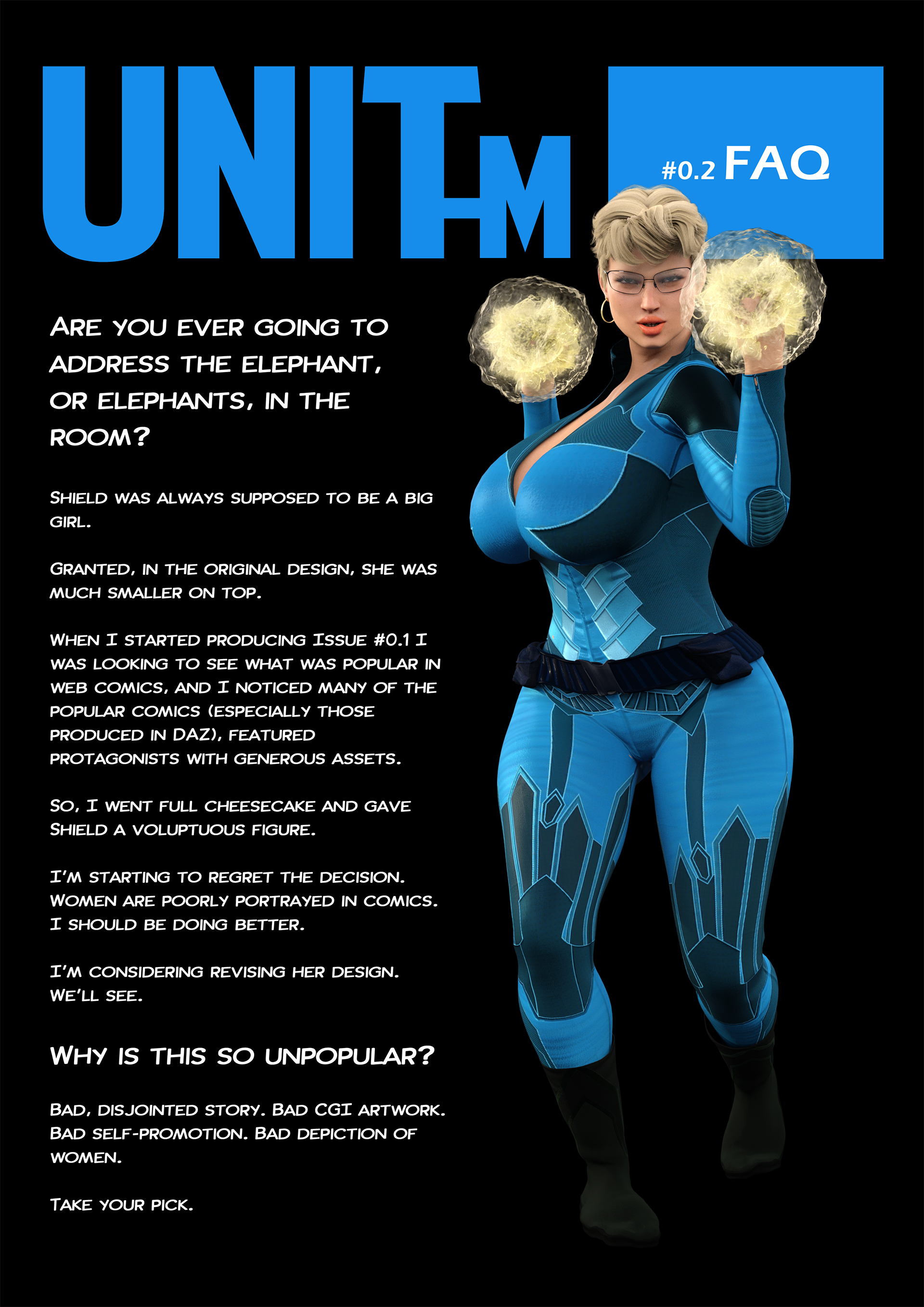 So, have my thoughts on this matter changed?

I’m more convinced than ever that to make it in this medium, especially as an action comic, and especially as a 3D, non-porn comic, you need a character with big tits and boobage in your advertising.

There are a bajillion free web comics out there. And 3D action comics are a dime a dozen, and mostly, with a few exceptions, disregarded as less-than-2D trash.

With so much competition, a comic only has a fraction of a second to make an impression.

I’ve tried advertising using other characters from this comic. They were a total bomb.

I want people to read this comic. I wouldn’t continue if there weren’t readers. I hate posting a page to crickets. I need some sort of feedback to make this satisfying.

Without Shield to advertise this comic, I feel I would have abandoned this project long ago for lack of interest.

But that’s not what I chose to do. I saw a medium that’s ripe with sexism, that treats female characters as objects, and I decided to perpetuate the worst of comics.

It’s a decision I dislike, but have decided that I can live with.

Does the gratuitous cheesecake mean that I don’t have any female readers?

I suspect this comic, and my decisions on how to advertise it, means that it skews straight, white, and cisgender.

This comic portrays women poorly and could be a poster child for the mendrawingwomen subreddit.

So, what am I doing about it?

I’ve backed off the gratuitous cheesecake shots. There’s still some cheesecake, but nothing like the pervy framing from Issue #0.1.

If I go hard on the cheesecake angle again, it will probably be to do something similar to this issue, something trope-defying.

It does not take away from the stories nor the quality of the world. If you have saved the scenes a redo should be fairly easy. I have no issues with her personality, nor really with the visuals of the character. I have not seen any 'fan service' shots nor anything that portrays her negatively. She is a hero, doing a heroes work. And has been portrayed as such.

If you are catching flack for.. Um. large assets? Then you need to make a choice as to what you want to do going forward. Ultimately, the choices are in your hand for this.

This comic doesn’t get nearly enough attention for me to be recieving any flak.

I’m just thinking out loud and padding this issue out.

I’m not going to re-render all of the old scenes. That would take forever.

1) Do nothing.
2) Seek an in-universe solution.
3) Just change the character design.

At least for the next issue I’m going with option 1, as I’ve already rendered a bunch of scenes.

The next issue starts on Monday, February 25. Unlike this issue, the release schedule will be a little slower and I’ll be posting two pages a week, instead of one a day.

Stay tuned and thanks for reading!

Women in comics should be diverse. Men, too.


Hereby, I cast a vote for option 1. Well, she could go to let her boobs surgically made smaller, I heard that some women do that, for some reasons, medical ones included, so option 2 wouldn't be a huge stretch. Option 3 would require to re-do all the previous pages. Then it's hardly an option, eh? But it would be the only option to the loss of "apparent seriousness" back, Option 2 wouldn't help with that.

But even though option 2 would be possible, I'd vote against it, for two reasons:
- She has a certain personality and the boobage may well have contributed to that, the experiences she had because of her body, good and bad ones - and I bet the comic creator might (subconsciously) taken this "background" into account. So, change her body and don't change her personality: You still have someone different.
- You can use it as a plot device. Sure, it created an additional difficulty, but as much as you are getting better with creating the images, you will also get better at writing, so even if it is now an annoyance, it may well become a feature later on.

(You read Grrl Power, too? IMHO Dave Barrak made a better decision to start with Sydney being below-averagely-developed and introducing other human female shapes later on. Made it much easier for him, methinks. But still, IMNSHO, now after you made this mistake, you should make use of it.)

Luckily, where I am story-wise right now I don't really have to make a decision on this any time soon.

I'm not opposed to just altering Shield's design. Comics are regularly tweaking their characters' appearances. I've made this option a little harder for myself by making the problem a plot point of Issue #0.2. But some minor tweaking isn't impossible.

I'm not re-doing any renders. If I decide to change Shield's appearance, all of the earlier stuff will stay as is, warts and all. (Frankly, I think the process is more interesting than the comic sometimes, and that includes recognizing and commenting on mistakes.)

I've set up a world where people have crazy powers, so seeking an in-universe solution might be less daunting than it seems.

Yes, that happens. But believe me, every single time I loathed it, be it "a small change" like Mr. Fantastic / Reed Richards suddenly looked like a slim version of J.J.Jameson or something bigger like the grey Hulk. Consistency, Man!

There is one change of a web-comic I'm still kinda miffed about: Twilight Lady by Blake JK Chen. The first few chapters were done by the author himself using Poser, the last two chapters were drawn by a comic artist.

Usually I’m much more into drawn comics than poser generated ones, but this one was done in a great way, with post processing to overcome poser deficiencies and the result fit to the dark theme extremely well – so the poser style “sunk in” to me. (And that even though I started reading with “The Indwellers” and then jumped back to the very beginning.) In a case like this I would expect the art to continue in a way that is as close as possible to how it was before and as far as I can tell now from the fresh impression of the latest two pages, the new artists seemed to be well capable of that.
But the sinister darkness was gone and never came back.

I don't see any issues with Shield's body type being the way it is. She's the type of woman that I latch onto visually because she looks unique compared to what we're normally inundated with. She stands out from all the rest. This woman is plus-sized and looks good with it! I wish I could meet someone like her in real life. Believe me when I say this; Stick to you're guns with her current look and don't let others detract you. She's gorgeous.

Clearly, based on how I'm marketing this comic right now I've decided not only to stick with Shield's design, but to place her front and centre in my advertising.

Does this perpetuate the negative way women are depicted in comics? Yes.

Should I feel bad about my decision. Absolutely.

If I may, I'd just like to express a few things about this.

First off, I'm one of the fish who bit on the clickbait, to torture a metaphor. I'll admit that it's pretty easy to get a moment of my attention with an attractive, exceptionally-endowed woman, but that alone will only get a moment of curiosity. It doesn't hold that attention without something under the surface. I got through the first mini-issue and saw the initial set-up, but wasn't entirely sold yet.

It was the second, featuring Shield, which really grabbed me. Attractive women draw attention, yes. But what hooked me in was how she had to deal with it. She's powerful, strong-willed, and exaggeratedly beautiful, so she SHOULD be on top of the world. But it's because of that beauty, especially combined with being part of a marginalized group, that the online a-holes felt entitled to do and say as they pleased. It felt painful, but real. Especially in the last couple of pages when, for all her power and projected strength, she couldn't stop the impotent redpills from having the last laugh. Ow...

tl;dr I think that her figure actually serves a narrative purpose. Like her abilities, it's something that sets her apart from the crowd and makes her a target, even though it's not something she should be punished for.

Thanks for clicking! And double thanks for actually reading the comic.

There are bajillions of webcomics out there, more than anyone could ever read in a lifetime.

I’ve been running ads for this comic since September 2019. I’ve tried a bunch of different ad variations and the only ones that get any clicks are the ones with Shield and a valley of cleavage.

Not only do the Shield-focused ads get more clicks, but the people that click on those ads also read more pages.

Way back on page 2 of Mini Issue 0.1 there’s a discussion with a reader in the comment section about how much they were turned off by Shield’s figure.

In that discussion, I argue that I went with a more voluptuous look for Shield because I saw that webcomics with well-endowed females get the most attention.

My ad analytics basically prove that hypothesis. As I said above, large breasts = clicks and readers.

I’m perpetuating the comic industry’s negative depiction of women and their bodies because it’s what’s popular. That’s not right.

Mini Issue 0.2, the story you cited, where Shield gets harassed by the committee to re-elect Donald Trump, is an honest attempt to address my problematic design decision and weave that into the story.

I’ve said I’m not going to change her design, and I’m sticking with that decision.

If I want to address this (and I still intend to), my only option now is to write stories that do better by her as a character.

Just my two-cents but maybe you could do something interesting with that meta wise.

Like, have her get together with a guy who was initially just attracted to her because of her "Vavoom" factor but who got to know her personality and found himself more intrigued and appreciative of her as a person. Similar to how some of us readers did.

Not a bad idea. I think it might be out of character for Shield though. She’s pretty sharp. I can’t see her getting serious with someone that’s only into for her looks. Shield strikes me as someone who knows what she wants and is 100% in control of her romantic relationships.

Maybe it starts as a purely physical fling and whoever she’s with gets attached once they get to know her. That could work.