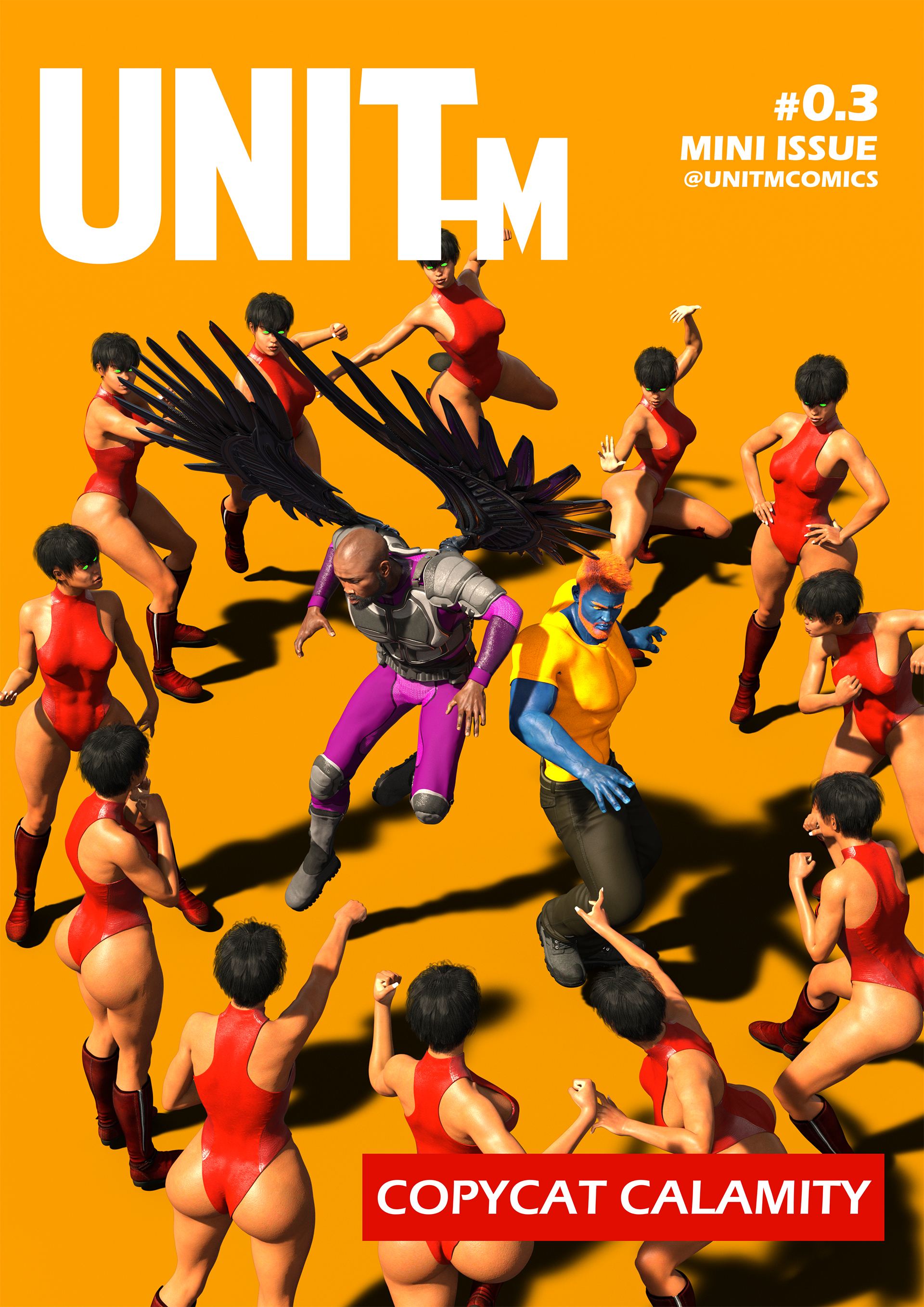 'K. Now I really want to be critical: These women have no (much*) over-developed shapes but they wear quite revealing outfits - while the men here are not revealingly dressed at all. The winged one wears a special suit with protective pads on the knees which makes sense if he is not a heavy hitter. The blue-skinned one looks physically strong but doesn't make a show of it. Were the woman heavy hitters who don't need to protect their bodies, then why the boots?

If you considered Shield's shape a mistake: Here it looks like you just did it again.

*: The hip to waist ratio looks a bit unnatural.

When I get to the commentaries for this comic I'll go more into this, but this design was not what I wanted. This was the only outfit that worked.

Here’s the initial design I wanted for The Copycats. Simple. Streamlined. Not super revealing. In DAZ 3D the more things you add to a scene the more it slows down your computer and the longer it ultimately takes to render.

Usually, for my somewhat out-dated computer, adding an extra character to a scene adds about two hours to the render time.

The in-program slowdown is harder to quantify, but it’s still significant. Too many characters in a scene and the program grinds to a halt.

Making modifications to characters or clothing also adds to the load.

To pull off The Copycats and their duplicating powers I needed to be able to render dozens of the same character in the same panel without it destroying my computer.

There’s a program for DAZ 3D called the Scene Optimizer. Essentially, it allows you to reduce the size of the texture maps and the mesh resolutions for just about anything. This can greatly reduce render times, and even helps in-program performance.

To make my script work I decided to create six different versions of The Copycats.

The idea was that I could use the full resolution models for up close scenes, and the optimized models for background scenes. Level 1s could be close-ish to the camera, and level 4s would be reserved for far away shots.

The level 4 models would look horrible, but they’d probably be good enough if they were blurred in the background.

There are drawbacks to using the scene optimizer.

First, as noted above, the reduced models look significantly worse than their original counter parts.

Second, the optimizing program wreaks havoc with clothing, causing clipping issues and other such problems.

Normally, I don’t care about minor clipping issues. Items can be individually fixed in-program or after the fact in Photoshop.

However, it would be insane to try to do this with dozens of models across dozens of panels. Whatever combination of character model and clothing I chose for this issue had to work perfectly, in any scenario.

Finding a Design that Worked

My script called for Indigenous characters. The model I used had the correct complexion, and it tested well in the scene optimizer. The figure was a little hourglass-y, but it looked fine in my original clothing choice, so I went ahead with it.

Other than the eyes, and a slight tweak to the skin colour, I didn’t make any changes to this model, as that would only add to the program load and render times.

Unfortunately, my initial clothing choice did not work at all. Even at level one there were already significant clipping issues.

I went through dozens of clothing choices before I had to settle on what you see here.

This was literally the only outfit that held up during the optimization process.

I hope this helps explain my decision making process here.

Thinking about this a little more, the reason why the more revealing outfit works is likely because of it's lack of size (less polygons, smaller texture maps) and the fact that it doesn't interfere with arm or leg movements.

The only thing that's simpler would be to have the character naked.

Thank you very much. Wow that's the most detailed answer I ever got.

Oh man that's such a pity, not to say PITA - the initial design would have been so much better on several levels.

I have heard of something like reducing the number of polygons to reduce rendering time and the problems this will likely cause. But I totally didn't expect it to cause a forced choice of clothing.

> The only thing that's simpler would be to have the character naked.

Which would have been even worse...
Hmm. Out of curiosity, if you have a naked character, could you still change the color of some parts (not all) of the body? That wouldn't have helped here anyway, methinks, I'm just curious.

(FYI, about 10 years ago I got a version of Poser. I gave up after about one hour of not even getting a naked body into the pose of walking. Never touched Poser again. About two years ago I had a very reluctant look at Blender. I only wanted one pose with a very specific body. There is a body generator for Blender. I got stuck when I didn't find a way to make the body as I wanted, so I dropped the idea I had in mind completely.)

I was actually just thinking about that.

What I could have done was dramatically alter the character’s skin colour and texture, with the final product looking something like Mystique from the original trilogy of X-Men films. She’d be naked, at least as far as the program is concerned, but wouldn’t look it. Then there wouldn’t be any clothing to worry about clipping.